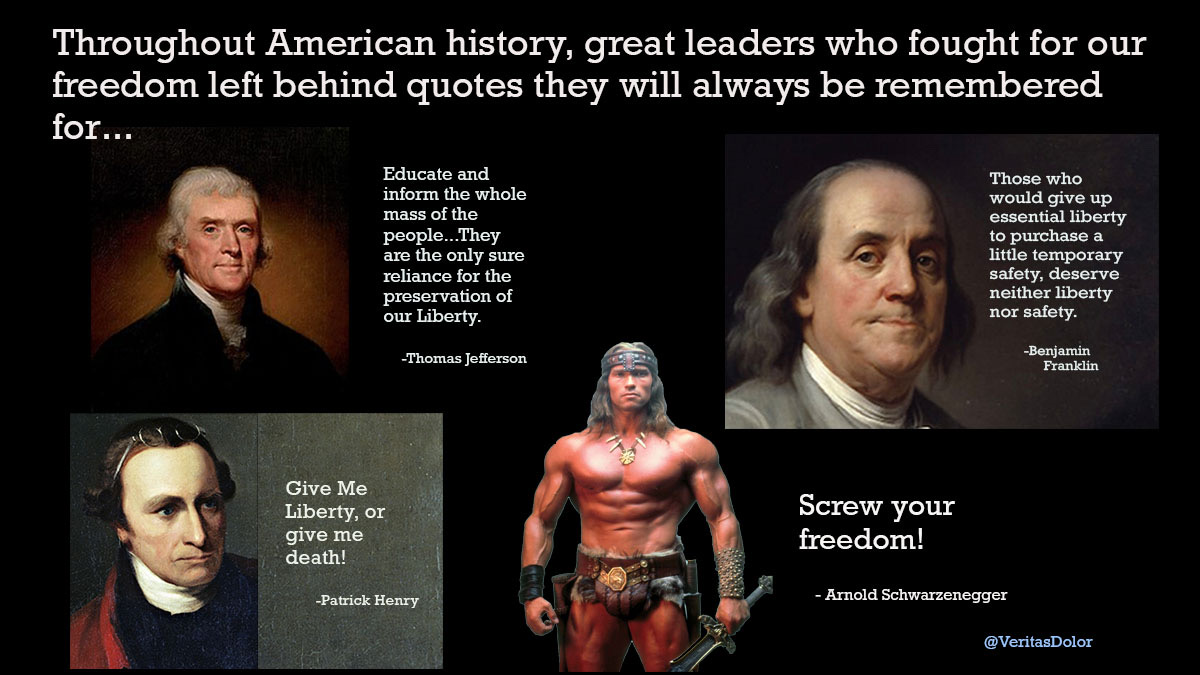 In my opinion Arnold Schwarzenegger in his recent interview blatantly disrespected those who lost their lives to ensure that we have the freedom that we do.

Throughout history, people have fought and died bravely, all in the name of freedom. Beginning with the Declaration of Independence, and establishing our country with “Life, Liberty and the pursuit of Happiness” as the founding principles. Our forefathers created the Constitution and the Bill of Rights in order to guarantee freedom for the people of this country.

Even in the lyrics of Our National Anthem, the Star Spangled Banner, we are reminded of the bravery with which many lost their lives in order to keep the United States flag waving to symbolize… “the land of the free, and the home of the brave.”

O say can you see, by the dawn’s early light,
What so proudly we hail’d at the twilight’s last gleaming,
Whose broad stripes and bright stars through the perilous fight
O’er the ramparts we watch’d were so gallantly streaming?
And the rocket’s red glare, the bombs bursting in air,
Gave proof through the night that our flag was still there,
O say does that star-spangled banner yet wave
O’er the land of the free and the home of the brave?

Lately politicians, actors, or like in the case of Arnold Schwarzenegger, interchangeable, it seems to be the trend to call for removal of our rights.  Completely opposite of encouraging the bravery that is symbolic of our country, and instead pushing fear and propaganda on the people.

In Benjamin Franklin’s famous quote, he says “Those who would give up essential Liberty, to purchase a little temporary Safety, deserve neither Liberty nor Safety.”

To most people, they would take this as a dire warning to never give up the most value-able gift that was given to the us through those who risked everything including their lives to make sure we had it.

Yet, in fashion of what seems like an endless stream of influencers, leaders and former leaders attacking our constitutional rights…Arnold Schwarzenegger blatantly, and shockingly, and with full disregard for those who lost their lives fighting for our rights, declared “Screw your freedom!”

In this post’s feature image, I have given a spot for Arnold Schwarzenegger’s embarrassing quote, next to to worthy famous freedom fighters’ to be saved and remembered throughout history.  I hope he realizes what an embarrassment he is, and perhaps one day, many years into the future, it will be a reminder to never let what has been happening lately to ever happen again. (but that would be another whole post in itself for another time).